Karjaa has always been Bob Malmström's favorite playground. To honor the great city and Pub Norris we decided to arrange a two-day festival with the best bands around.

On Friday Bob Malmström plays "Tala svenska eller dö" in its entirety with Pub Norris veterans The Dogshit Boys and Karjaa's own Berusat Uppror hitting the stage during the night.

On Saturday Bob Malmström plays a set consisting of newer material along with thrash prodigies Nuclear Omnicide along with high-speed rock trio The Backstabbers ramping up the speed.

On Saturday a Bob Malmström documentary by Bosse Ahlgren will be premiered before the night's festivities. More info on the movie to be announced!

Additional information on the event's facebook-page or elitbolaget@gmail.com 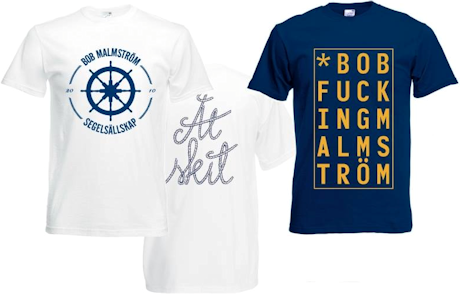 Not only one, but two new shirts have been unleashed to the wolves! Choose your design (white or blue) and size (S-M-L-XL) and send your order to elitbolaget@gmail.com for payment instructions.

BOB MALMSTRÖM :
VI KOMMER I KRIG (WE COME IN WAR)

THE KINGS OF BOURGEOISE HARDCORE RELEASE NEW ALBUM AND DOCUMENTARY

Bob Malmström return with their new album "Vi kommer i krig" on September 9th. Extensive international touring has expanded the band's worldview and contempt of the political left and the poor people beyond the borders of Finland. Musically the album is a ferocious mix of hardcore punk, metal and rock. On the new album the band progresses melodically and musically past the framework laid on the last album "Punkens framtid".

Even though the lyrical themes have a more international theme, there are a few key concepts the band nails to the wall addressing local issues. Firstly Finnish is not a language, it's a symptom. Secondly, these streets are their streets. Thirdly, they wish the rest of you have a pleasant journey to whichever hell you're destined for. With these words Bob Malmström continue their march for the glory of the Bourgeoise.

New territories need to be conquered to keep the flow going; along with the album a documentary of the band's voyages in China in 2014 will be released later in the year. After the release Bob Malmström head out touring Finland during the Fall of 2016. Central European and Swedish dates will be released for October/December later on and in early 2017 the caravan continues across the plains and meadows of Europe and beyond.

Kejsarsnitt (Cesarean in swedish); The Barons of Bourgeoise Core Continue Their Triumphant Campaign With a Seven Inch Vinyl Release

High on their pedestal, above the peasants' struggle, Bob Malmström stands mighty. Under their belts they have a five year career of diminishing the unworthy, consuming copious amounts of Dom Perignon and tearing down the stages of Europe and China. Before them stands a blank canvas of unpainted opportunities.

Like their peers, the greek deities, Bob Malmström ocaasionally descends among the masses to spread knowledge and wealth. With them Anno 2015 they carry four new songs in the form seven inch black vinyl; ear candy for the audiophiliacs and crust punks.

On Friday 14th of August the album is released and delivered to those lucky enough to sit with a pre-order in their hands. The lucky who get to purchase the limited edition vinyl are also awarded with a download coupon for bandcamp. The album is released in co-operation between Playground Music and Elitbolaget.

The first video release of "Jävla svenskar, jävla finnar" (Damn swedes, damn finns) saw the light of day in early summer and the second video single "Du kan lita på mig" (You can trust me) is released along with the vinyl. The track is a classic Tomas Ledin song from 1993, revamped to suit the future people of 2015. The video is a Jukka Pihlajaniemi production and the audio has been engineered by Teemu Aalto.